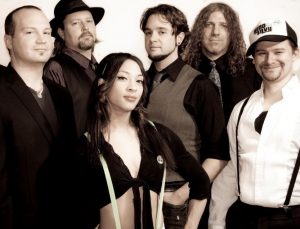 Exploding from the shadows of the Sierra Nevada mountains, Mojo Green has been staking their claim over the last few years as one of the regions premier horn driven funk and soul dance bands. Originally formed in 2009, over the past several years has transformed into a Funk and Soul, Horn Driven, powerhouse with a sound all their own. Mojo Green is Frank “Fletch” Fletcher on Drums and Trevor Rice on Bass laying down the tight and funky grooves that create the foundation, with Tim Bain on Guitar adding some tasty, deep funk rhythms and blistering lead lines, a Heavy Funk Horn section composed of Kevin Thomas on Bari Sax and Monty Adams on Trumpet and Miss Jenes Carter adding her Soulful and Sexy Lead Vocals. Mojo Green plays a style of high-energy dance music that is extremely funky and makes you want to dance and grind until the very last note.

Their debut album ‘Funk in Public’ released in May of 2013, has been well received by both fans and the media alike, while also earning an award for Best Album of Northern Nevada for 2013 by the Reno News and Review.

Over the past several years Mojo Green has had the pleasure of sharing the stage with such names as: Trombone Shorty, The Funky Meters, Orgone, The Monophonics, Tea Leaf Green, Big Sam’s Funky Nation, Nigel Hall w/ members of Lettuce, Albino, Moksha (with Skerik, Peter Afelbaum and Jennifer Hartswick), The Polyrhythmics, SambaDa, Delta Nove, Turquaz, to name a few.

Their tour schedule takes them all over the West Coast with stops at several major music festivals including: Rail Road Earth’s Hangtown Ball, The Squaw Valley Funk Fest, The Bounce Festival, Summer Fest in Idaho, Freedom Dance Festival and The Ridgestock Fest.